An uncommon sight in Japan ...

A group of about ten devotees from Japan were recently in Sri Mayapur. Theirs wasn’t a simple pilgrimage: they were trying to gather ideas on how to expand their preaching. Initiating spiritual master Satyadeva Prabhu was with them. He had preached in Japan many years ago and is back taking responsibility in the “Land of the Rising Sun.” The Yatra is not at its brightest point of its (ISKCONically speaking) long history (Srila Prabhupada visited Japan four times). The core devotees amount to about ten, assisted and accompanied by a circle of less committed twenty.

Our artist, Kesavi Mataji from Japan, brought a delegation to our office (room 117 of the Long Building) and we discussed ideas for improving and expanding. I stressed being were the people are: the internet.

Tokyo is a huge conglomerate where 28 million people live and suffer. Moving around takes time and money (Japan is one of the most expensive countries in the world), and many people are working intensely exaggerated hours at their jobs, often doing unpaid extra-time. But 67 percent of the 130 million population use the internet (as compared to 69 percent in the USA—but individually the Japanese might use it more). The present ISKCON site (www.krishna.jp) is practically dormant; stagnant.

Basically I told them that cyber-space is where they can easily and inexpensively connect with people for establishing and cultivating relations. Building new relations appears to be a major issue in Japan preaching: they told me that practically all the devotees who joined in recent years had first seen Hare Krishna in other countries. Book distribution is comatose, and, to add injury, the devotees have to pay 700 dollars per month just for the storage place to keep the unsold books. But the devotees who stay on are of the tough brand (samurai-bhaktas?) and determined to bring the sun of Krishna, the sun of the Bhagavata culture, to this unusual land of paroxysmal technology and diffused alienation. They are the type that doesn’t surrender (I mean, they surrender to Krishna, not to Maya).

While we were talking my wife, Sri Radha Govinda Dasi, was doing her Skype preaching, chatting with interested people about spiritual topics, even one contact from Japan. She gave a brief demonstration of how to use some basic Skype tools and then left the computer to Satyadeva Prabhu’s wife, Mahaguna Mataji from Japan, a Srila Prabhupada disciple who right away got in touch with a new Japanese person and started preaching.

I stressed that with some organization and practice they could come to the point of offering training courses through the web, overcoming many obstacles related to distance and time. People thus cultivated could come to a special retreat for more direct association.

To initiate and build new friendships and answering questions on the Internet is something any devotee could do. I suggested they invest some time and money in building one or more effective web sites, perhaps also focusing on “entry-level” attractions, bridging themes many seekers are already comfortable with (yoga, reincarnation, vegetarianism, stress-relief and the like). And of course, as they say, appetite comes by eating, so when they start seriously seeing the web as a powerful tool for outreach, more and more approaches will manifest.

The devotees seemed pleased by our sharing. I look forward to hear good news from this isolated but glorious community, from this circle of driven preachers, faraway from any other ISKCON yatra but desirous to spread Krishna consiousness and influence the subjects of the emperor to surrender at the lotus feet of Lord Caitanya. 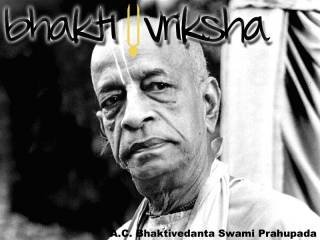